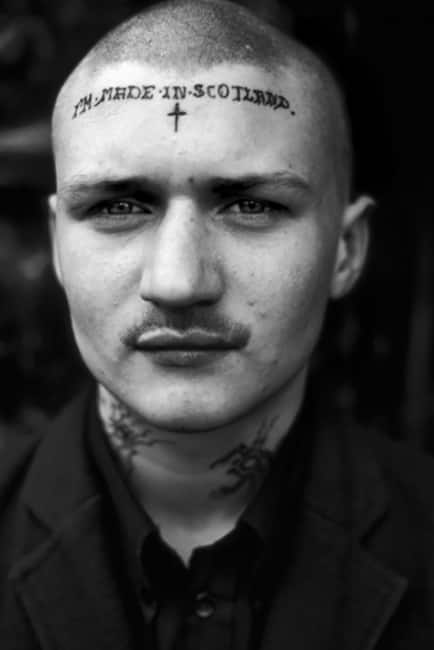 Almost all of my photographs of skinheads were taken between the summer of 1979 and the summer of 1984, and the vast majority in the earlier of those years.  They were taken either in London or in some of the seaside towns easily accessible from London.  Some first appeared in a show called 'Skinheads' at the Chenil Studio Gallery in Chelsea, in October 1980.

Back then, I wasn't a professional photographer, (in truth, not even a particularly keen amateur) and to begin with, I hadn't intended to start photographing skinheads at all. Rather, they found me. In early '79 I was already engaged in what eventually turned out to be a lengthy photographic study of the New Romantics (though back then they were not known as such).

I'd been documenting this nascent scene in the Soho nightclub 'Billy's' and, one evening, a group of about half-a-dozen skinheads turned up.  They saw me taking photographs and one of them asked me if I'd like to take some photos of them too.  They seemed pretty friendly and not at all camera shy.  I took a few snaps, we got talking and Wally suggested I go with the whole gang on one of their Bank Holiday jaunts to the seaside.

That was what led, eventually, to five years of photographing skinheads.  In those five years I got to know some of the skinheads quite well and liked many of them.  Almost all were polite and courteous to me.  I saw virtually no violence, just a handful of scuffles.  If I had seen any fighting, I certainly wouldn't have photographed it for the simple reason that I wouldn't have wanted the presence of my camera to affect the situation.

Other than that, there was no self-censorship.  I wanted to remain objective (although I later came to believe that to be impossible).  Susan Sontag famously wrote that "the photographer is not simply the person who records the past, but the one who invents it."  I certainly hope this isn't the case with my photos.  They were all chosen to be displayed on the basis of two criteria: if I thought it was a good photograph; or if I thought it helped to tell the story.

Back in the early '80s, I turned down a couple of opportunities to turn the photographs into a book. I didn't want either to glorify the skinhead lifestyle or become an apologist for them.  And I still don't.  My political and social views were not the same as most of the skinheads of that time but I hope the photographs can now speak for themselves.

I've put together this book on Blurb, the online digital publishers -

I'm still looking for another publisher to get a terrestrial, web-offset version printed (which could possibly include many of the interviews I also did at the time) but of course, I realise this may never happen.